As mentioned in the previous reviews, the Dollar Index is very likely to be at the start of an Elliott 5th bearish wave. Taking out the Weekly swing High at 97.585 should negate this assumption.

We pointed out that closing above the Weekly 50 SMA should be considered as a major sign of strength that might negate this assumption as well.

The market did print a LL LH Weekly bar, touching the 50 SMA from below, but closing above the 8 EMA (short term sentiment line). This might bring a Weekly HH the next week, and a possible false thrust up in case indeed we have just been starting a new midterm bearish wave down.

More precisely, a Daily bar that makes the Weekly HH thrust up, reaches even the level of 97 but doesn’t close entirely the current open gap at the levels of 96.76-97.042, closing weak below the Daily 200 SMA and preferably on or below the Daily 8 EMA, -finally followed by a Daily thrust down – is a clear sign of weakness, and most likely might be a good level to join the bearish wave (on the Daily LL breakdown).

Otherwise, closing entirely the above mentioned gap and closing a daily bar above the Daily 200 SMA is a major sign of strength that might put in a serious doubt the above bearish assumption.

A more conservative way to join the bearish wave (and bigger stop loss level), is to wait for a Weekly HH and hold on till this correction up is entirely over, going short on breaking down the Weekly swing Low, at 94.94. Pay attention that taking out the current Weekly High at 96.5 is important, and without it the correction might not be over yet (i.e. we haven’t seen yet the Low prior to the correction) !

A clear Demand zone is waiting for the market at the 93.5 till 94 including an open gap, and the market might make another Weekly correction up before dealing with these levels again – have we really entered a midterm bearish wave. 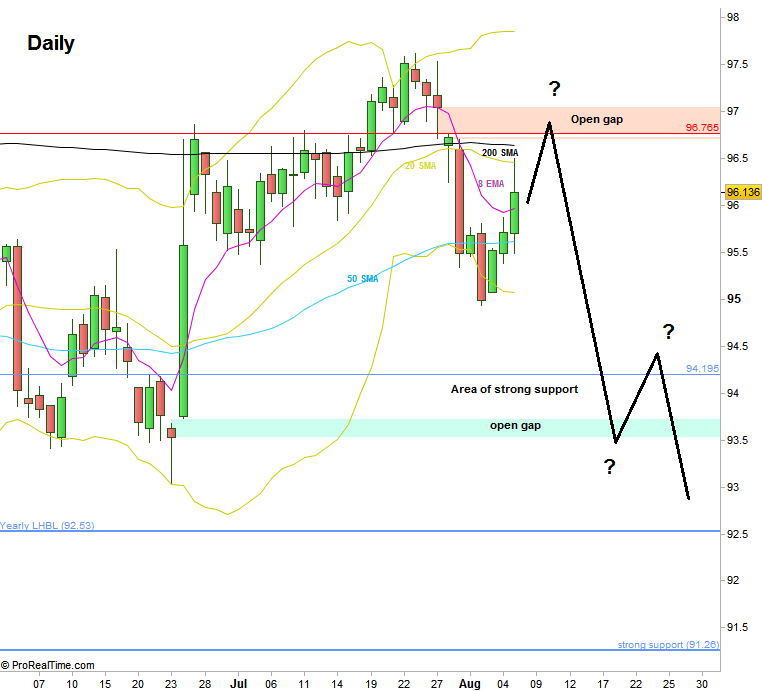