As mentioned in the previous reviews, the current assumption is that we’ve already started a midterm bearish wave, Elliott Wave 5, possibly targeting the 87 area (!). Here is the Weekly chart with the wave count. 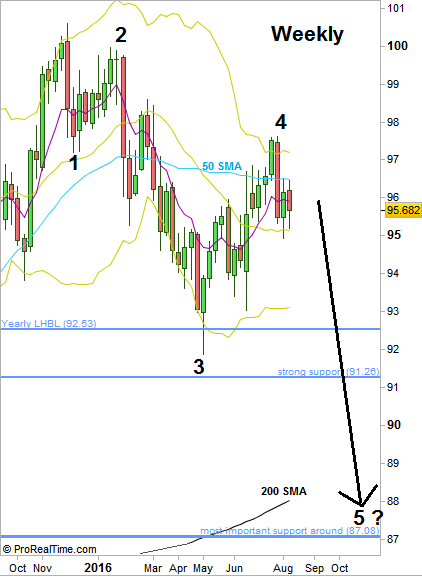 The Weekly 50 SMA is an important indication for the market to reveal bullish intentions. Notice that closing the Weekly bar above this moving average is a clear sign of strength, and should alarm us as for this midterm bearish wave assumption !

The passing week has printed a Weekly bearish inner bar, retesting that moving average from below, and closing bearish, below the short term sentiment line, the (Weekly) 8 EMA.

The most important question for the coming week is whether the market is ready to continue the bearish wave by taking out the Weekly swing Low at 94.94, or maybe the correction hasn’t been over yet, meaning that the amplitude the correction had created so far is not wide enough for the market to start the bearish wave, and we need some expansion upward before the next decline.

If in the coming week, the market is determined to continue the decline by taking out the 94.94 Weekly swing Low, the current target would be the Daily open gap, levels 93.527 till 93.73, hence we should see later on another bearish setup there – is the bearish assumption correct.

Otherwise, under the above assumption, it can be another week of correction, challenging again the Weekly 50 SMA, going probably higher. As long as the Weekly swing high at 97.62 is still respected, but best if the Weekly High eventually respects the open gap at 96.76 till 97.04 (by not fully closing it), and eventually the Weekly bar closes below the 50 SMA line, – it is still very bearish.

Technically, the market is currently already in a short term bearish setup to reach the support at 94.82, which means also taking out the Weekly swing Low, hence the bearish trigger mentioned above. But again, there are also many chances to negate this setup due to the current correction amplitude, by going above the Daily swing High at 95.96 (on Monday the trigger is even lower, above 95.92), expanding the correction. 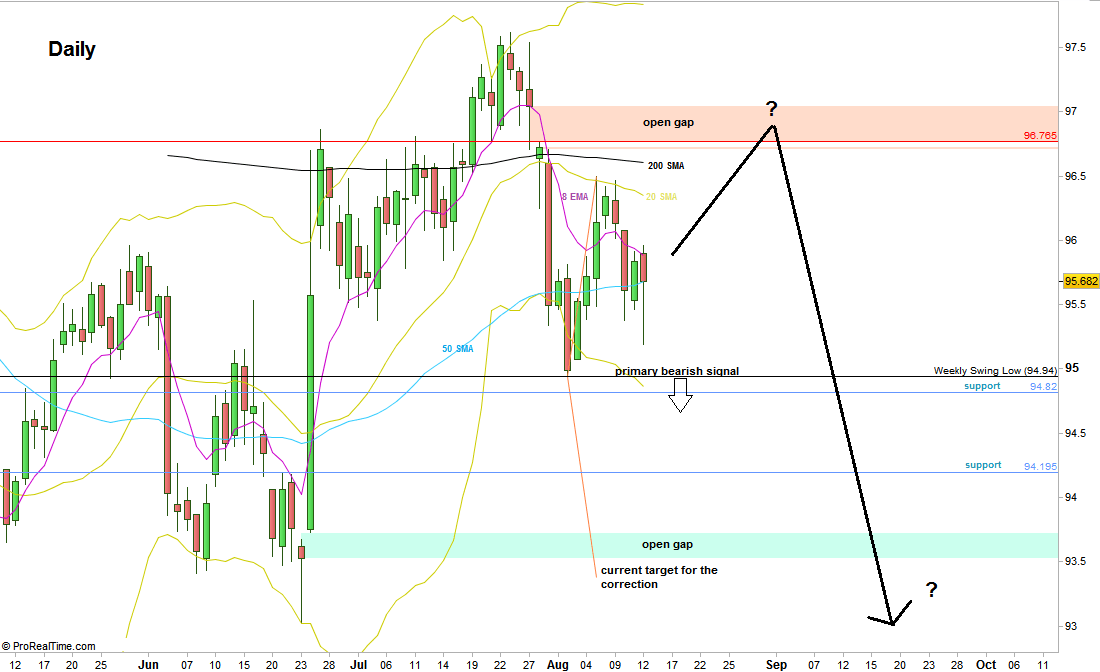