A rather tensed corrective week ended relatively strong in an area prone to a support.

The level of 94.195 has proven to be a strong support, and was tested again two times in the passing week before bouncing up.

The fact that the bullish Friday’s Low was a Daily swing HL bar (higher than the swing Low of Tuesday) that didn’t take out the previous week’s High at 95.77, and despite the strong momentum up didn’t manage to reach, not to mention close above the Daily 50 SMA and Weekly 8 EMA – should guide us to remain still in the same assumption, the Dollar Index is bearish for the midterm.

I would consider two main scenarios for the coming week. The first one is to have the opposite of last Friday throughout the whole week, a developing weakness that finally deflates Friday’s big momentum up. The second scenario is to see another attempt to reach the above 96 level, where the big question is whether the market still respects the Weekly swing High at 96.5. For the second scenario, a clear sign of weakness is to see a Daily bar that takes out the 95.96 level, followed by a thrust down (Daily LL). In this case, wait for a small Daily correction up, and go short on the follow through down.

Taking out the Weekly swing High at 96.5 is a red line for the bearish side, hence should put the midterm bearishness assumption in a very big doubt. 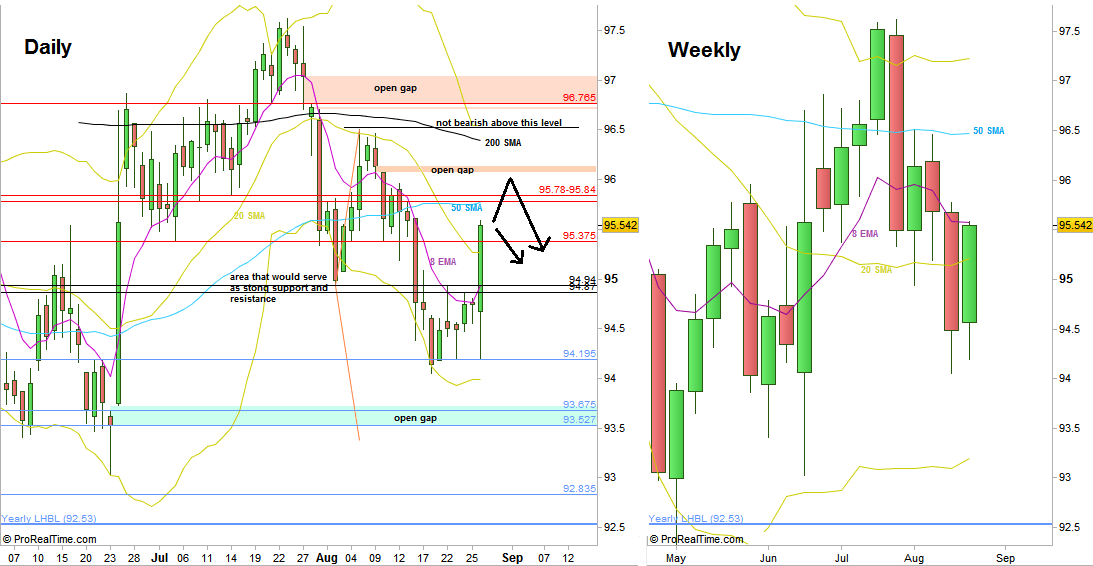 Dollar Index: Daily and Weekly charts (at the courtesy of prorealtime.com)