Not surprisingly, after such surprising NFP news, the Dollar Index has revealed considerable signs of weakness, and ended the week with a huge bearish bar, more than 3 times the average true range of a daily bar lately.

The monthly bullish engulfing bar of May (mentioned in the last review) did close above the monthly 20 SMA, but failed to close above the short term sentiment 8 EMA, not to mention any HH confirmation on the new monthly bar. This behavior, pure technically, might bring such a reaction immediately after…

Last time we had such a mega daily bar was at March 10th. However, technically there are differences between the two. The March 10th bar started with a huge upthrust (false thrust up), and breaking it down 4 days later has started a remarkable daily downtrend, as part of the monthly downtrend we have been facing since December 2015. The last Friday’s bar, although being of the same scale, has started with small daily upthrust all within a range. Without immediate further weakness continuation next week (i.e. daily Lower Low), the ability to initiate a big move from such a price action is limited, i.e. daily signs of strength in turn, right at the beginning of the week, might be enough to turn the tables.

On the weekly timeframe, last Friday’s bar has created a huge Weekly bearish engulfing bar, right on the sloping down 20 SMA, covering the last 2.5 weekly bars.

Starting the new week with a thrust down, especially taking out the Low at 93.65 should indicate that the correction up we’ve been thru since May 3rd has already been finished, and the next big bearish wave down has already started, probably heading down to the next major support level at the 91, and eventually might test the bigger support at the 87 area.

On the other hand, small bullish daily inner bars that don’t take out the passing week’s Low, hesitatingly climbing up, can indicate that the correction up started in May hasn’t been over yet, and we might see the price returning to the 96.4-97.5 range to probably make the topping action of this correction (mentioned in the previous review). 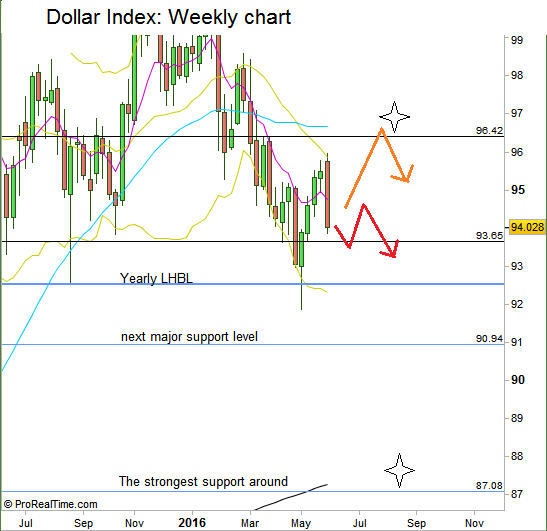 Dollar Index: Weekly chart with the two main scenarios mentioned (at the courtesy of prorealtime.com)