After the bearish Friday (the NFP report) on the Week before, the passing week did continue on its first half the thrust down, but eventually closed rather strong than you might expect in such situation.

Last review we mentioned the bearish engulfing pattern on the Weekly timeframe, triggered by a Weekly LL. But the close of the current week raises many doubts. Currently it looks as if it is not in a hurry to continue the midterm downtrend, maybe buying time till the end of the Quarterly and Semiannual bars by the end of this month, maybe waiting for further news (Like the news from the UK about the European Union, within 11 days).

From the price action point of view, a thrust up (Weekly HH) in the coming week that is followed Though (taking out the Weekly high, retracement and the taking again the High made before) rejects the bearish setup on the weekly, and we should expect another push into the midrange at 96.5-97, as described in the previous reviews.

On the other hand, pay attention that the strong bullish move of last Thursday and Friday didn’t manage to close above the Daily 20 SMA and the Weekly 8 EMA (short term sentiment). Respecting the Weekly High, or an inability to make a follow through move in case the Weekly High is taken out, -show sign of weakness and the price might decline again. In this case, taking out the Weekly Low at 93.41, NOT before coming Thursday (Monday thru Wednesday need to stay above 93.41), assuming that the High at 95.96  is still respected – is a good bearish signal to reach the Monthly low of 91.88, and even further more.

Here is the Dollar Index 8H chart, with main support and resistance levels to pay attention to, including the scenarios mentioned above: From “Very weak” in case the Weekly high is respected, thru an upthrust (false thrust up) to a bullish activity is there a follow-through. 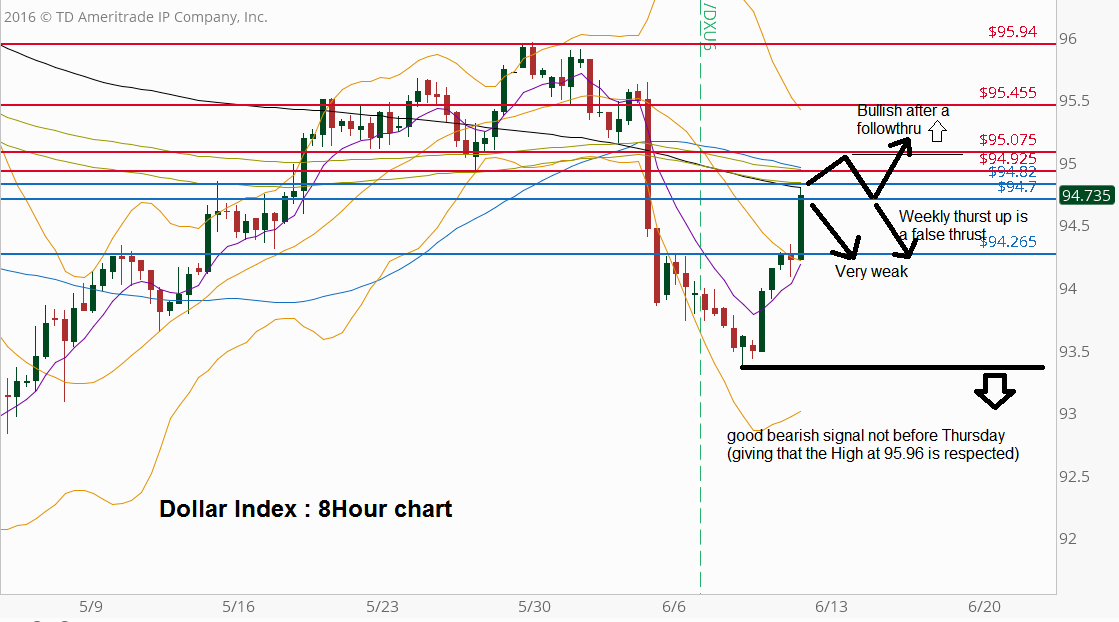 Dollar Index : 8H chart (at the courtesy of thinkorswim.com)